This marching season, Hickory High School had a rough start.  The day before we started band camp, our 5th bass drum player was murdered along with his father in their home.  He had been in percussion for 3 years and was going into his senior year.  The father was a very active band parent too.

Everyone knew them both, because of their outgoing personalities.  They were loved by everyone because they had so much love for everyone.  I was a close family friend, so this was very depressing for me.  We had gotten especially close in the marching band.

This year’s show was dedicated to them and their family.  It was a tough season, but we had tons of support from the other schools in our area.  I remember lots of kind words, supportive signs/banners at the shows, and one school even had everyone sign a drumstick and gave it to us.  All of us in the band ultimately pulled together to support one another as well.  The photo you see here was when we had our tropical spirit day in honor of our lost friend. 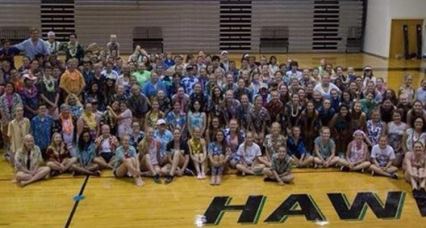 At the end of the season, we had a big competition at Liberty University.  It was our last one of the year, so we were all very nervous.  With the support of the community and one another, we were able to win the competition!  That’s what band is all about; coming together to achieve a goal, even when the going gets rough.